While searching for a hobby for my wife I got interested in photography. It seems that I am especially drawn towards low light photography which I understand is what “normal” photographers don’t usually do. I played a little with my phone in low light situations and even though it’s amazing where things are in 2019, it’s still not good enough for what I am looking for.

Of course, part of the fun is getting the gear so after doing a little bit of research I decided to get the Sony A6000 because “they” say it’s a very capable compact mirrorless camera. I was also considering RX100 and A7 because the first one is way more compact and the second one more capable but bulkier, I feel this one I chose is a good middle ground.

My understanding right now is that the glass is the most important thing if you have a decent camera. Also, there is no point in having a very good camera if you don’t have a decent lens because it will probably not make a difference.

There are 4 main properties to consider for lenses and some other less important things:

Generally speaking, is a measure of that fits into the frame. A small focal length makes wide pictures which fit a lot into the frame and a high focal length number “zooms” a lot bringing the subject closer. The image below should make it the basic concept clear. 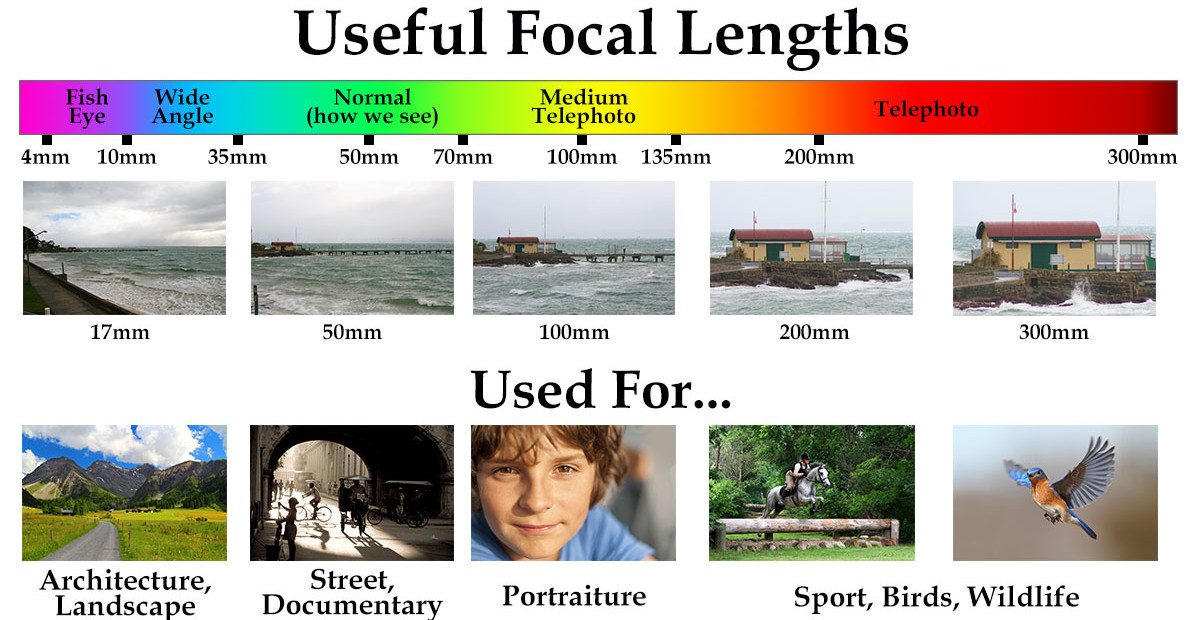 The focal length also changes how compressed things appear in the background.

In this example, the zoom is done with the legs so the subject is kept in the frame. As you can see, the background changes drastically.

The first lens I got is a versatile 18-200mm which means that I can take both wide and significantly zoomed-in photos.

The aperture is the opening through which the light enters the camera. Lenses have a variable aperture but we care about the smaller number which represents how much the aperture opens thus allowing more light in. 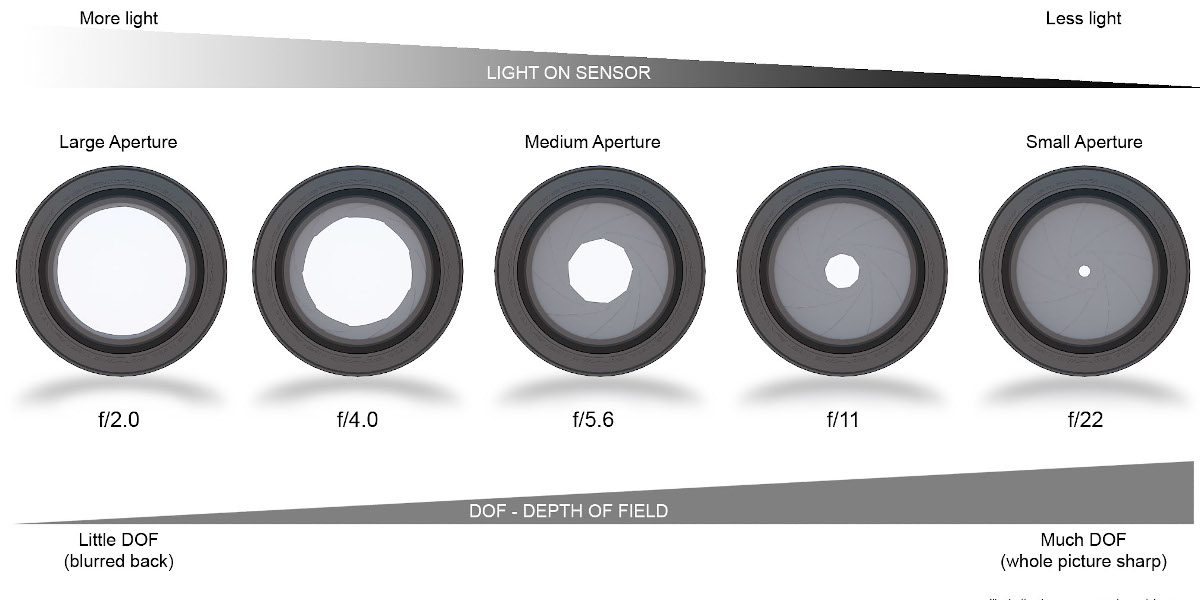 A lens with a smaller aperture is called a fast lens because more light comes in thus we can expose for a shorter time and catch faster-moving subjects.

Changing the aperture also influences what is kept in focus.

The second lens I got for photographing the stars is an f/2.0, 12mm which should allow for capturing lots of lite and a decent portion of the sky.

Manual lenses are just what the name says. They don’t have motors or electronics and can easily be adapted to different camera systems. For setting the focus and aperture they have some ring which you turn. The zoom lenses also have a ring for that. 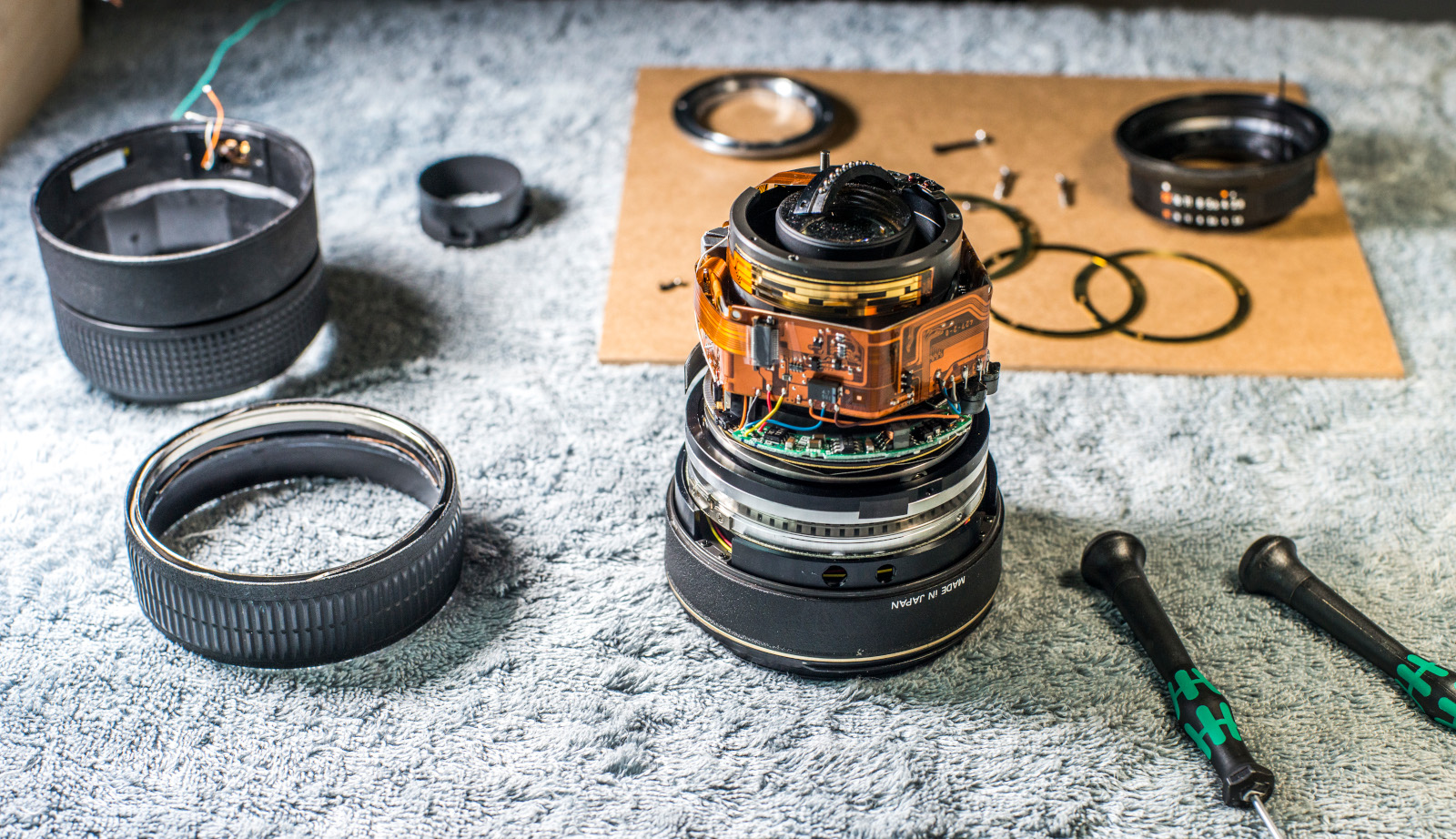 Normally I would prefer a lens with autofocus but for some applications such as night photography, it doesn’t matter because you set it once and live it like that.

The 18-55mm kit lens of my camera has a lot of “auto” in it. Autofocus, auto-aperture, optical stabilization and even motors for zoom. Of course, all these auto things can be set to manual and configured with buttons from the camera.

I wouldn’t say one is better than the other, it just depends on what you do with it. I like that my 12mm, f/2 lens is manual because to me it means that most of the cost comes from having better glass. And I also like that my “walk-around” lens has a lof of auto because that optical stabilization is a very nice feature when taking pictures zoomed in and handheld.

Glass is not perfect and physics not on our side when light is bent in complex ways. The science of producing a good lens deals with issues such as distortion, chromatic aberration, vignetting, lens flare and others. To fight these issues lenses use multiple glass elements combined into groups. The issue with this is that the more elements are used the more light is lost due to reflections. The glass can have antireflection coating but I guess you can see why lenses can get expensive. 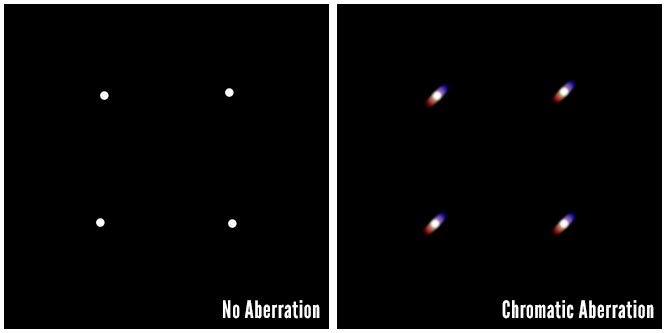 Distortions are more of an issue with wide-angle lens and chromatic aberrations with faster lens used wide open. Combine that with a high contrast image of stars against the dark void of space and you probably have the least favorable scenario.

The 12mm, f/2 which I got for night photography is supposed to be pretty good quality.

About the camera body

I wanted to get a camera which is affordable, compact and way better than my phone.

It’s a lot to consider when you get the first camera and don’t know what you get into: 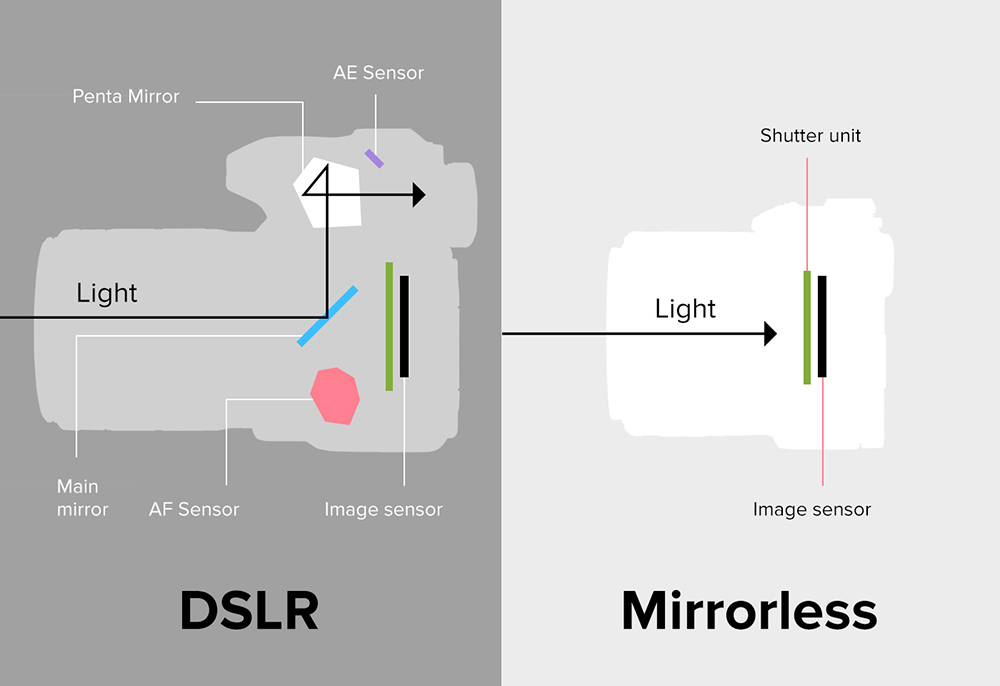 The main thing I considered here it’s that it’s supposed to be compact and capable. DSLR is too bulky for me and I think it’s just older tech without any real advantage. The point and shoot cameras “feel” too limiting since you can’t change lenses on them, even though RX100 really seems way better than a phone. 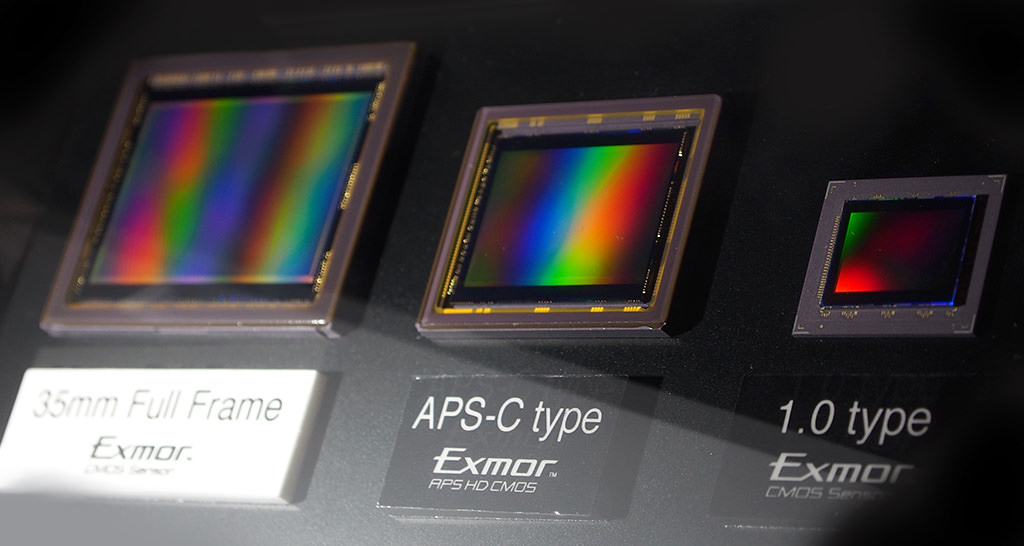 For the same number of megapixels, a larger sensor has a larger pixel and thus can collect more photons of light. Then the signal to noise ratio is higher and thus the image can be better. This is especially important in low light photography when we need to amplify the signal a lot (set a high ISO) to see the very little available light.

The most recent phones which produce usable images in low light with a very small sensor do a lot of post-processing and what you get is not what the sensor sees. As a fun fact, a sensor in a phone is more than 10x smaller than a sensor in a cheap mirrorless camera.

The most common sensor sizes are full-frame, APS-C, 4/3 and 1 inch. Full-frame cameras are too large for my taste and the lenses are more expensive and they also need to be bigger. I don’t see myself caring these with me. The next best thing is APS-C which looks like something that I’d drag with me on vacations or to the park.

There is a lot of variation here and once you choose a brand you kinda get locked in the ecosystem. Manufacturers usually have their own mount for lenses and while adapters exist it’s not ideal especially for lenses with electronics#### 3. Brands

There is a lot of variation here and once you choose a brand you kinda get locked in the ecosystem. Manufacturers usually have their own mount for lenses and while adapters exist it’s not ideal especially for lenses with electronics.

Sony seems to dominate the mirrorless game so far so I choose the A6000. It looks like their lenses are more expensive and less available than the Nikon lenses but so far I don’t regret my choice. Having almost no experience with other cameras I have nothing to complain :)

Preparing to photograph the stars

The very dark day was 1st August 2019 when it was a new moon which means the moon was completely in the shadow. We have one of these every month. I was quite lucky the first one had clear skies and that I didn’t have something else to do.

The very dark place can be found looking at a light pollution map like lightpollutionmap.info. 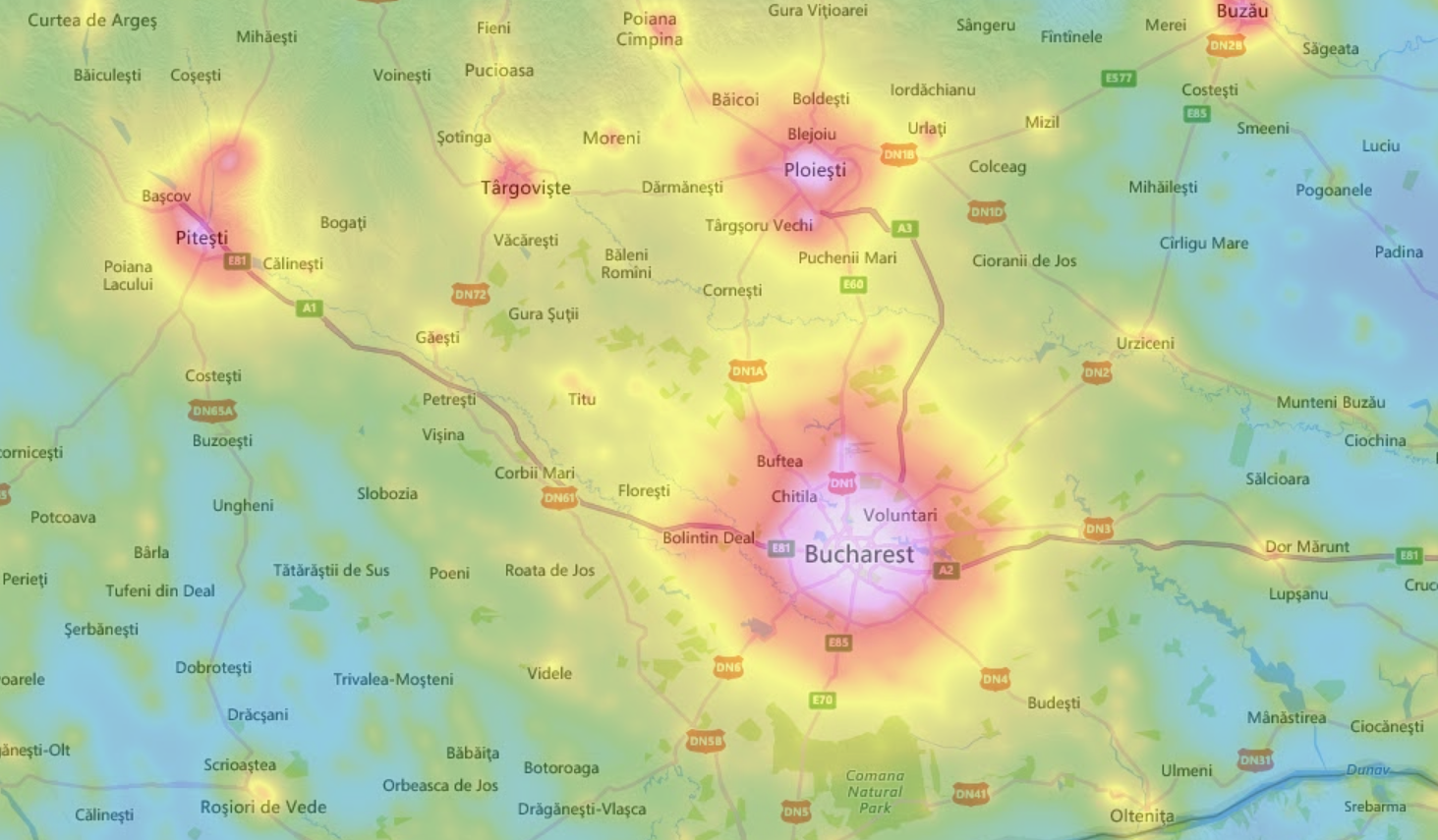 I live in Bucharest so I can find some very dark places ~100km away.

I’ve ended up ~70km away because I thought it was dark enough and very convenient. The next day I found out that I was in a class 4 zone on the Bortle scale. If I’ve driven for an hour more I certainly could have reached a darker place (class 3).

Once you have the day, the place and the weather, all you have to do is put the camera on a tripod and make these settings on the camera: 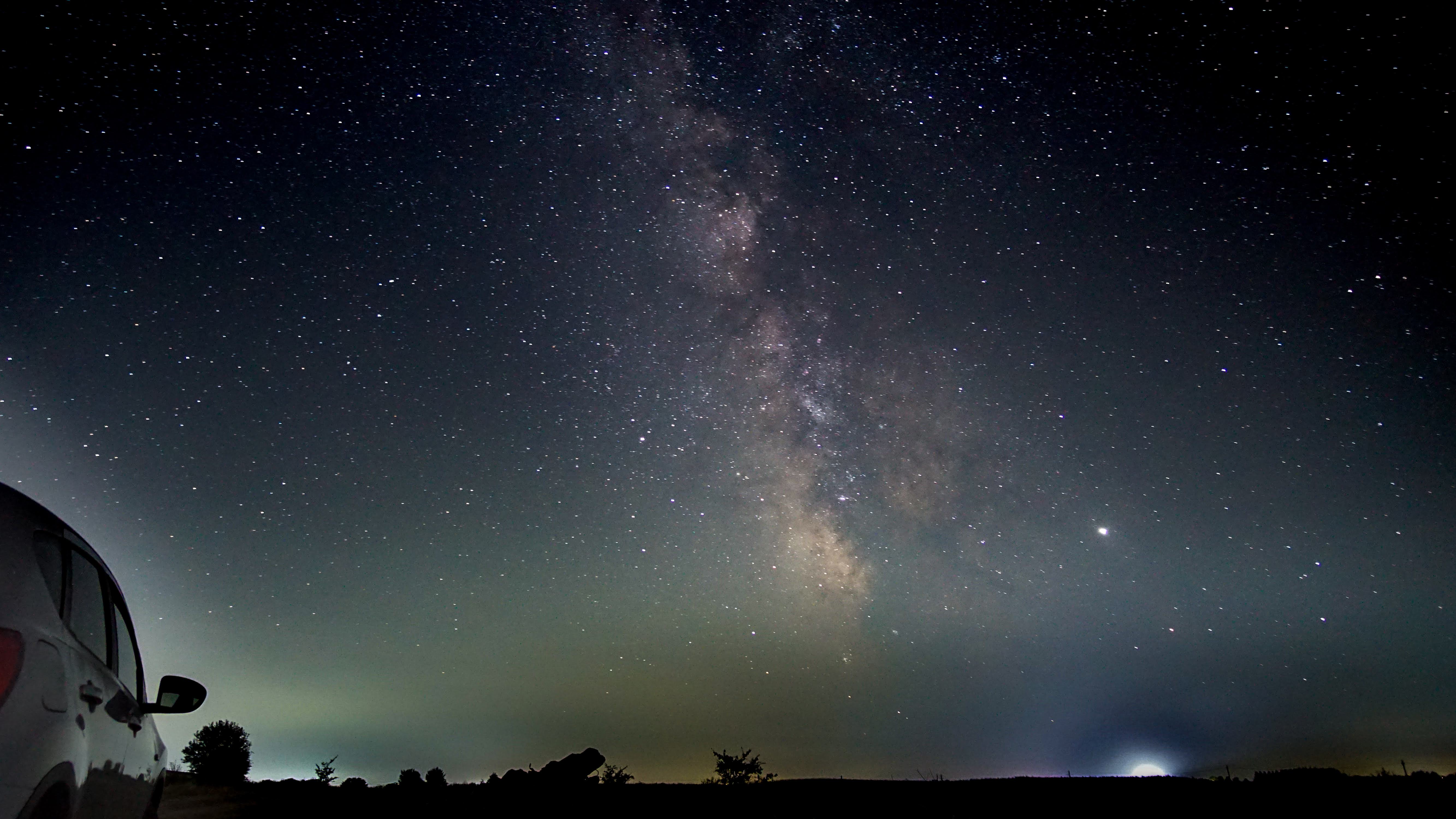 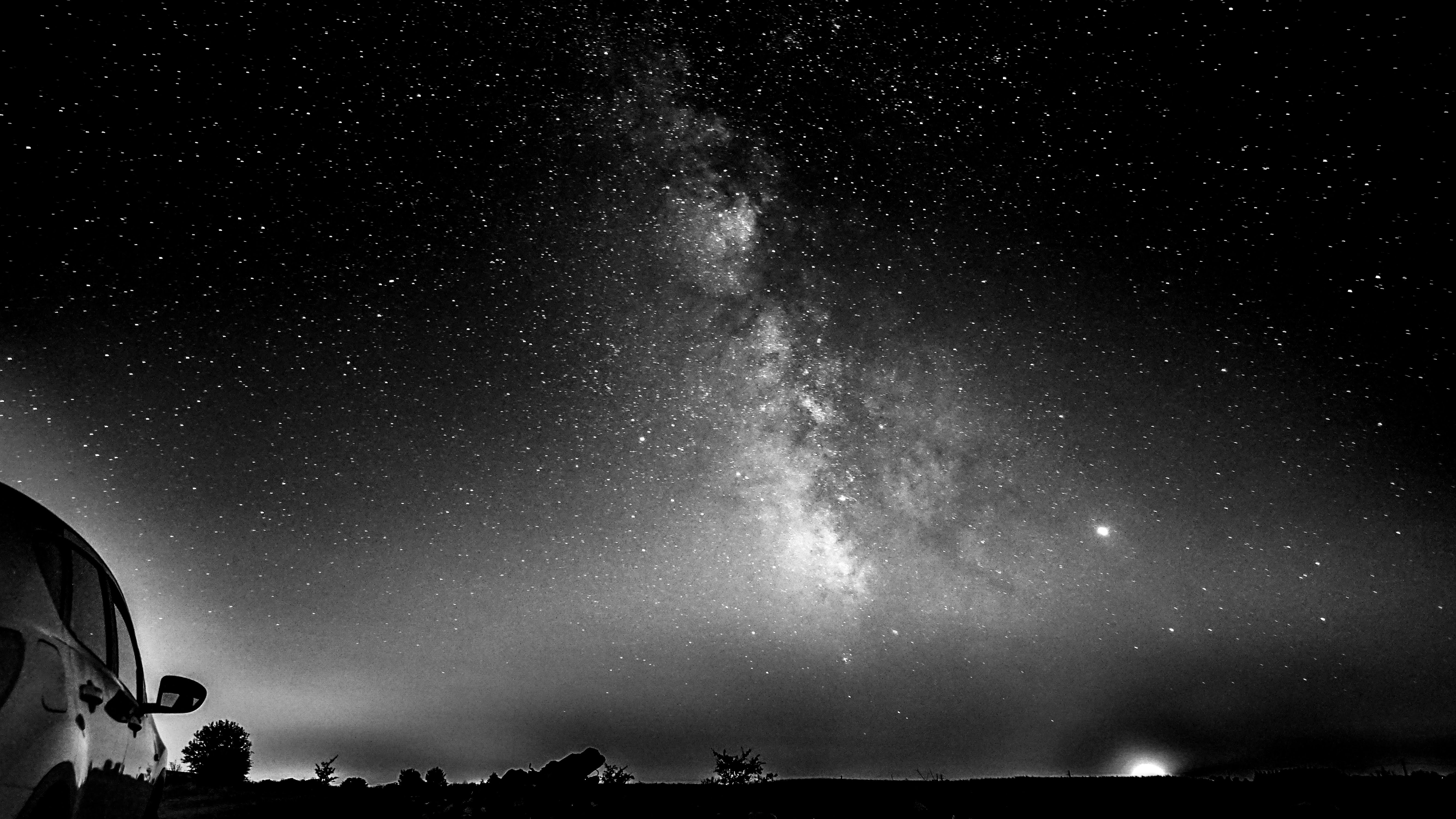 I realize it can be better in various ways, but to be honest I’m satisfied with this first attempt. If there is going to be the next time, I want to go to a place with even less light pollution, try to make a timelapse and learn how to actually edit these. Also, I could experiment with stacking and if I find something interesting to put in the frame also experiment with light painting.